Have you ever wondered where the airline crew sleeps during a long flight? As a passenger, you might just lean back in your seat and catch a nap — or even a full night’s sleep — but your crew needs rest too.

Most of the time, a flight is short enough that a crew doesn’t need to sleep during a flight. However, for longer trips, especially to other continents, sleep is a necessity. It’s essential to avoid excessive sleepiness to maintain airline safety.

Where do they catch their rest?

For a flight that’s longer than a few hours, airlines are required to allow time for breaks and sleep. Different countries have different regulations, but managing fatigue and sleep ensures that everyone is able to do their work well.

On larger planes — the ones most likely to make long trips — there is an entire area of the aircraft that passengers never see. This is the crew rest area. 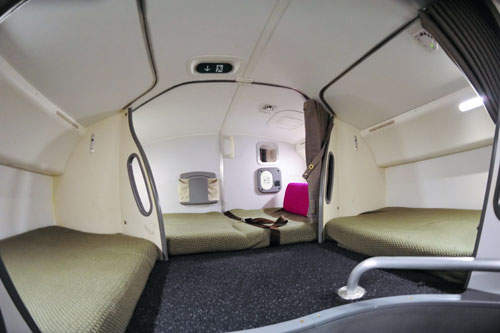 Where is the Rest Area?

On long flights, widebody aircraft with built-in crew quarters service the routes. On some planes, these exist under the passenger deck near the center of the aircraft. Others have the flight crew’s quarters above the passenger cabin at the back of the airplane.

Pilots often have separate rest areas near the front of the plane. Sometimes the rest areas are portable sleep arrangements, which can be put into place for longer flights and removed for extra cargo for short rides.

If you’re on a long-haul flight, you can rest assured that your crew is getting breaks and rest in separate areas of the plane. This not only allows your crew to do their best work, but it also keeps everyone much safer.

You can’t see it, but there are places for the crew to sleep!