Belief in proper “sleep hygiene” is a given among professionals and most members of the general public in 2021. An article on CNN.com details a recent study from Frontiers in Psychiatry that adds more credence to the notion, this time naming smartphones as the latest gadget to be avoided. 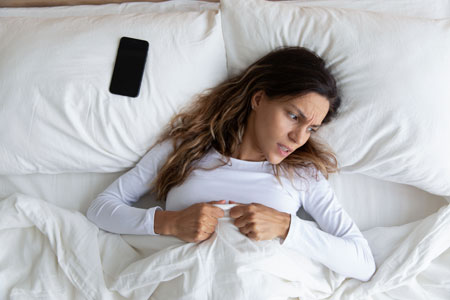 The article by Sandee LaMotte summarizes the study that looked at smartphone use among 1,043 students between the ages of 18 and 30 at King’s College London. Researchers asked the students to complete two questionnaires on their sleep quality and smartphone usage, in person and online.

“Using a 10-question validated scale that was developed to assess smartphone addiction in children, nearly 40% of the university students qualified as ‘addicted’ to smartphones, the study found,” writes LaMotte.

“Our estimated prevalence is consistent with other reported studies in young adult populations globally, which are in the range of 30–45%,” lead author and King’s College medical student Sei Yon Sohn and her coauthors wrote in the study.

“Students who reported high use of cellphones also reported poor sleep quality, the study found,” adds LaMotte. “That falls in line with prior studies that have found overuse of smartphones at night to be associated with trouble falling asleep, reduced sleep duration and daytime tiredness. That’s likely because use of smartphones close to bedtime has been shown to delay circadian rhythm, the body’s normal sleep-and-wake clock.”