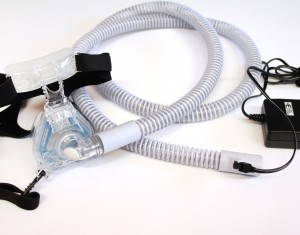 Once overlooked as a relatively minor part of the CPAP setup, heated tubes are joining humidifiers as viable ways to recuperate dissatisfied patients.

Are there patients who don’t like the comfort benefits of Hybernite® Rainout Control (ROC) System heated tubes? Johan Verbraecken, MD, concedes that they might be out there, but he has yet to come across any.

As a pulmonologist and medical coordinator at the Belgium-based Sleep Disorders Centre, Verbraecken is all too familiar with the complaints that come with CPAP therapy. Side effects such as rhinitis and a wet face in the morning can derail even the most patient of CPAP users.

Verbraecken, who also serves as e-learning director of the European Respiratory Society, saw this recently in a 5-year CPAP user who happened to work in the security department of a nuclear power plant. The man had successfully used CPAP for 5 years, but started suffering from rainout and/or excessive moisture. “We advised him to sleep with the windows closed, and eventually to warm up the room temperature,” says Verbraecken. “We also offered him a sleeve to protect the tube, but these measures were not effective. He refused to close the windows because he said he could not sleep. He started the Hybernite, and the last time I saw him he was happy with what he called a ‘perfect solution.’ The windows remained open and he was content.”

Meanwhile, physicians may opt to administer nasal corticosteroids to counter some side effects, and humidifiers are always on the docket. When humidifiers alone do not do the trick, Verbraecken does not hesitate to talk about Hybernite, an affordable option, which most people are more than willing to pay. “Every person who has tried the Hybernite heated tubes has liked it—every single one,” he muses.

Why not recommend it right off the bat? Ultimately, Verbraecken prefers to use an incremental approach. “Some patients are happy with the results of the heated humidifier alone,” explains Verbraecken. Despite stellar results with heated tubes, Verbraecken believes most physicians don’t really ponder the negative aspects of CPAP. As a result, knowledge of heated tubing is relatively low.

In some cases, misconceptions may still exist. “When the technology was in development, there were concerns that heated tubes could lead to bacterial contamination and overgrowth, but that is not a problem,” says Verbraecken. “It could be a problem if people use the tube for a long time and do not keep it properly cleaned, but that is also true with non-heated tubes. We would have seen more upper airway infections if concerns were justified, and we have not seen that at all.”

Beyond the physical side effects that can resemble the common cold, unwanted noise is often added to the annoyance list for many CPAP users. Surprisingly, heated tubing can help. “If you have a lot of rainout in the tube, you get a collection of water at the lowest point of the tube,” says Verbraecken. “If you add air, this can lead to bubbling noise which can be irritating. By adding the Hybernite, you can recuperate some patients who may have fallen out of compliance due to this seemingly small annoyance.”

Humble Beginnings
About 2 years ago, a company called Plastiflex Healthcare, a division of Plastiflex Group NV, decided to use its considerable experience manufacturing industrial flexible hoses and apply it to CPAP. Plastiflex contacted Verbraecken’s Centre in an effort to reach the European market.

The wires generate heat that maintains air temperature inside the tube, ultimately warding off problematic condensation. Verbraecken notes that the wires are positioned for uniform heating along the tube’s entire length, a system that avoids water droplets on the wall of the tube—and the resulting accumulation of moisture. The combination of the heated tube and the humidifier works to control condensation.

Universal Use
Verbraecken says the Hybernite’s appeal stems from its ability to be used with each kind of humidifier. Other heated tubes on the market can only be used on one machine. “This tube is universal,” says Verbraecken. “That is a major advantage.”

Some manufacturers choose to make tubes that are only compatible with their own machines—a mistake in Verbraecken’s eyes. “Another major heated tube has no independent current, so it gets power from the CPAP machine,” he says. “You can’t combine it with another machine. That is a disadvantage.”

Johan Verbraecken, MD, is a pulmonologist and medical coordinator at the Multidisciplinary Sleep Disorders Centre, Antwerp University Hospital and University of Antwerp. He serves as vice president of the Belgian Association for Sleep Research and Sleep Medicine and e-learning director of the European Respiratory Society.