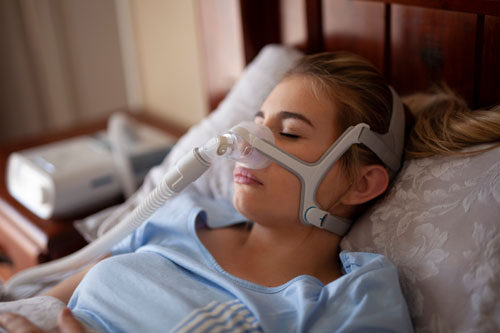 Long-running website Salon threw itself into the sleep arena with a 1,500-word missive that starts by comparing a CPAP mask to Darth Vader’s visage. Salon is largely known as a “news and culture” site that focuses on politics with science, food, and entertainment thrown into the mix.

The coverage mirrors what can only be described as a sleep medicine renaissance, with various sleep “gurus” appearing on podcasts and news shows with massive followings. The latest entrant from Matthew Rozsa, staff writer for Salon, describes his initial optimism when diagnosed followed by “dread” when he strapped on his CPAP mask. Rozsa does not mention oral appliances in his article.

“I went with a nasal mask, but for the first few nights I couldn’t resist the urge to rip it off of my face,” Rozsa writes. “Other CPAP users had complained to me of feeling constricted and unable to toss and turn while attached to the machine; or having dry mouth when waking up; or hating the feeling of the straps against their skin. For me the problem was visceral: That nasal mask triggered an instinctive fear of suffocation.”

“There are two common complaints I hear from people that have recently been prescribed a CPAP machine,” Bruce D. Forman, PhD, a psychologist practicing in Weston, Fla. who specializes in treating insomnia, told Salon by email. “The first is that the mask itself feels uncomfortable. The second is the sense of being suffocated.”

Rozsa does not downplay sleep apnea, instead mentioning that, “Obstructive sleep apnea is more than an inconvenience; sufferers are at a high risk of elevated blood pressure, heart disease, strokes, diabetes, Alzheimer’s disease and a number of mental illnesses. While some people can correct their apnea with lifestyle changes like weight loss or surgery (one method, an ‘Inspire’ implant that moves the obstructions out of the way, is garnering increased attention), most will be prescribed a CPAP because the machines improve health outcomes despite their drawbacks. This puts many patients in the difficult position of struggling to sleep while feeling physically and psychologically uncomfortable with their appliance.”

Rozsa details the case of Michelle Strauser, a 61-year-old woman in Westerville, Ohio, who told Salon “that she probably owes her life to the fact that she was able to overcome her initial difficulties and get used to a CPAP.” Before she started her therapy in 2011, “she felt constantly exhausted and would try to nap whenever possible. After waking up in the morning, she had terrible headaches. No amount of sleep ever helped her feel rested. Yet that does not mean she immediately embraced the CPAP.”

Rozsa concludes: “I did have to learn to get past the psychological angst of wearing the mask. My trick? I channeled my inner ‘Star Wars nerd.’ If you listen carefully while breathing with a CPAP, it almost sounds like Darth Vader’s iconic inhales and exhales. By concentrating on seeing if I could match my breathing to the sounds of the character, I distracted myself from my CPAP anxiety and managed to drift off to sleep. Now it has become a routine. Since it works, my doctor has no complaints.”