The possibility of massive trucks driven by sleepy drivers has long haunted the national consciousness. Trucking unions have occasionally clashed with regulatory agencies, but all sides have agreed that rest breaks are necessary. 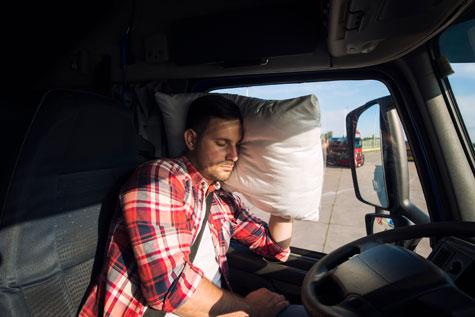 According to an article at FleetOwner.com, trucking fleets can monitor when their drivers are taking their “hours of service” mandated breaks with electronic logging devices, but they can’t detect if those drivers are getting clinically proper rest. “Oftentimes, they aren’t,” writes John Hitch, “due to sleep apnea, which is detrimental to both the individual driver’s health and the well-being of those sharing the road.”

Fleet Owner goes on to mention that sleep apnea “is often caused by obesity, which according to Healthy Trucker of America, affects half of the nation’s truckers. Mild to severe sleep apnea may impair the sleep of 28% of commercial truck drivers, according to a study by the University of Pennsylvania and sponsored by the Federal Motor Carrier Safety Administration (FMCSA) and the American Transportation Research Institute.”

For professional drivers, drowsy driving is known to slow reaction times with the possibility of falling asleep at the wheel always looming. According to the National Highway Traffic Safety Administration, that led to 846 fatalities in 2014.