A mid-April letter published in the New England Journal of Medicine raises additional questions about the exact nature of COVID-19 effects. Largely considered a respiratory ailment, the disease caused by the novel coronavirus is now showing signs of affecting the brain. 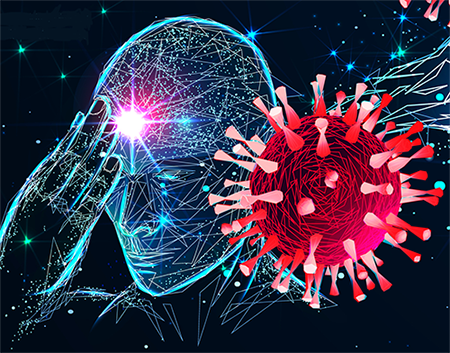 Physicians at the University of Strasbourg, Strasbourg, France, sent the letter to NEJM, and the following is an excerpt: “We report the neurologic features in an observational series of 58 of 64 consecutive patients admitted to the hospital because of acute respiratory distress syndrome (ARDS) due to Covid-19. The patients received similar evaluations by intensivists in two intensive care units (ICUs) in Strasbourg, France, between March 3 and April 3, 2020…

“In this consecutive series of patients, ARDS due to SARS-CoV-2 infection was associated with encephalopathy, prominent agitation and confusion, and corticospinal tract signs. Two of 13 patients who underwent brain MRI had single acute ischemic strokes. Data are lacking to determine which of these features were due to critical illness–related encephalopathy, cytokines, or the effect or withdrawal of medication, and which features were specific to SARS-CoV-2 infection.”

A synopsis of the findings at BBC.com reports that there are now more than 300 studies from around the world that have found “a prevalence of neurological abnormalities in COVID-19 patients, including mild symptoms like headaches, loss of smell (anosmia) and tingling sensations (arcoparasthesia), up to more severe outcomes such as aphasia (inability to speak), strokes and seizures.”

“We don’t know yet if the encephalopathy is more severe with Covid-19 than with other viruses, but I can tell you we’ve been seeing quite a lot of it,” says neurologist Elissa Fory of the Henry Ford Foundation in Detroit, Michigan, as quoted in the BBC article. “As the number of cases increases, you will start to see not only the common manifestations but also the uncommon manifestations – and we’re seeing them all at once, which is not something any of us have encountered in our lifetimes.”