DUBLIN – Jazz Pharmaceuticals and the Hypersomnia Foundation recently launched I Have IH, a disease awareness campaign that aims to increase understanding of idiopathic hypersomnia (IH), a debilitating sleep disorder. The campaign seeks to empower patients to recognize their symptoms and improve conversations with their care teams. 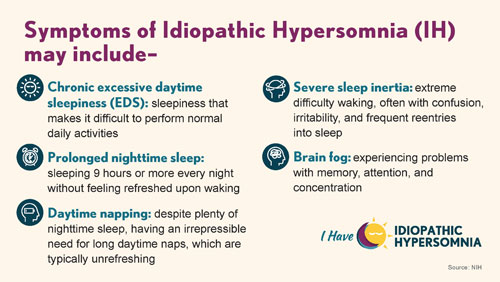 IH is often characterized by chronic excessive daytime sleepiness (the inability to stay awake and alert during the day resulting in the irrepressible need to sleep or unplanned lapses into sleep or drowsiness). In addition to excessive daytime sleepiness, symptoms may include severe sleep inertia (prolonged difficulty waking with frequent reentries into sleep, confusion and irritability), a core symptom of IH, as well as prolonged, non-restorative nighttime sleep and long and unrefreshing naps.

People living with IH face challenges in managing their condition as healthcare providers underdiagnose IH and there is a current lack of U.S. Food and Drug Administration (FDA)-approved therapies. Jazz and the Hypersomnia Foundation have partnered together on this campaign to help increase awareness and knowledge of IH within the health and larger sleep community and to activate people who have or may have IH to initiate insightful conversations with their physicians.

Healthcare providers’ low familiarity with IH may contribute to patients experiencing long delays in receiving an accurate diagnosis—up to 10 to 15 years in some cases. Notably, 87% of the surveyed physicians stated that diagnosing IH can be challenging, with more than half of healthcare providers (57%) reporting that they have personally misdiagnosed IH as another condition before providing the correct diagnosis. Also, a strong majority of providers (86%) reported that they think that patients who have IH are often misdiagnosed with depression and/or anxiety.

“I’m happy to see that Jazz and the Hypersomnia Foundation are committed to this community and working to help physicians and patients, as well as their supporters, better understand this debilitating neurologic sleep disorder, with the aim of strengthening dialogues between patients and their doctors,” said Richard K. Bogan, MD, FCCP, FAASM, associate clinical professor at the University of South Carolina School of Medicine. “As a sleep specialist, the findings from this survey do not come as a shock. I am well aware that some specialties that often are the first to encounter IH patients don’t have enough awareness of the sleep disorder or the diagnosing process to accurately diagnose them, often causing missed diagnoses.”