Introduction
Patient exercises have been shown in two randomized controlled studies to be effective for reducing both the symptoms and severity in patients with moderate obstructive sleep apnea syndrome. A study by Puhan,1 et. al. involved lessons to practice and play the didgeridoo, a wind instrument that involves voice control as well as breath control. Regularly playing the didgeridoo, 5.9 days per week for an average playing time of 25.3 minutes per day, for a four month period of time reduced the average Apnea/Hypopnea Index (a measure of severity) by almost 50% (22.3 to 11.6) and lowered the sleepiness (symptom) from an average Epworth Sleepiness Scale score of 11.8 to 7.4. Guimares,2 et al, showed in a randomized controlled trial that oropharyngeal exercises developed for the treatment of OSAS significantly reduced the AHI (severity) and subjective symptoms as well. The exercises, derived from speech therapy, consisted of isometric and isotonic involvement of muscles of the tongue, soft palate, and lateral pharyngeal wall. The exercise set consisted of activities simulating suction, swallowing, chewing, breathing and speech. The target effects are soft palate elevation, tongue protrusion and mandibular elevation to keep the lips together. This study was not designed to explore the exact mechanism by which the signs and symptoms were improved. It does demonstrate that daytime exercises alter muscle tone during sleep.

Reflex Activity
The oral cavity, the tongue and the pharynx are functionally integrated to perform such vital and complex life functions as breathing, drinking, masticating, swallowing, and speaking. The sensory receptors that innervate these parts are constituents of reflex systems that reflect a huge range of complexity. These oropharyngeal reflexes are in fact critical to maintaining life. Reflexes in the upper airway are protective by preventing aspiration, facilitating vocalization, transporting boluses of food and water and protective of breathing by maintaining a patent airway.

Genioglossus, the main tongue muscle, is a protruder. It has an important role in airway protection and maintenance of airway patency, especially in patients with obstructive sleep apnea. Styloglossus and hyoglossus are tongue retruders. Activation of genioglossus under hypoxic and hypercapnic conditions brings about tongue protrusion and pharyngeal air- way dilation.3,4 In a study by Mateika,5 et. al. the styloglossus and hyoglossus were also coactivated in response to hypoxia and hypercapnia. This coactivation is the response of complex reflex activity between tongue protruders, tongue retruders and chemical sensors in the central nervous system. A reflex is defined as the sum total of any particular involuntary activity.6 Specific sensory inputs can subconsciously induce motor responses that have reciprocal effects on different motoneuron pools. Reflexes provide relatively hard wired circuits through the central nervous system to control a set of often antagonistic muscles for co-ordination of a given response, such as a swallow. The motor neurons and the Golgi tendon system are part of a neurologic feed- back loop for maintaining muscle tone.

A reflex reaction is conditioned not by one reflex arc but many. Coordination is part of the reflex. According to Sherrington,7 “the main secret of nervous coordination lies in the compounding of reflexes”. Learning is involved in establishing many reflexes. Reflexes elicited from stimulating the oral region alter recruitment of lip, tongue and jaw muscles. The type of sensory stimulus determines the type of reflex elicited – from simple reflexes to complex behavior affecting oral and pharyngeal regions. Motor neurons responsible for the reflex activity of the head and neck are located in the brainstem – medulla, pons and midbrain.

The tongue is a complex muscular organ. Extrinsic tongue muscles attach to at least one bone and function to alter the shape of the tongue. Intrinsic tongue muscles have both their origin and insertion in muscle. They protrude, retrude and move the tongue laterally. The chief tongue protruder, the genioglossus muscle is extrinsic. The electromyographic activity of genioglossus has been shown to be in phase with respiration when awake or in a resting state.8 Changes in mandibular posture have a direct effect on tongue activity and may relate to the role of the tongue in airway maintenance.9 Reflexes elicited from stimu- lating the oral region alter recruitment of lip, tongue and jaw muscles. The type of sensory stimulus determines the type of reflex elicited – from simple reflexes to complex behavior affecting oral and pharyngeal regions.

An important part of the research of A. J. Miller10 has been description and study of reflexes controlling orofacial func- tion. Relative to tongue protrusion Miller has identified five tongue reflexes. Tongue reflexes are activated from motoneurons from three cranial nerves: hypoglossal, trigeminal and glossopharyngeal.

Masseter-Hypoglossal Reflex7
Direct stimulation of the masseteric nerve (V ) contracts the III masseter muscle. The masseter-hypoglossal reflex is that masseteric nerve stimulation also inhibits polysynaptic firing of hypoglossal motoneurons to retrusive tongue muscles. A passive jaw opening beyond rest position stimulates the masseter to shorten, eliciting reproducible inhibition of tongue muscle retrusion that lasts as long as the jaw is open. Stimulation of this reflex can be easily incorporated into oral sleep appliances to inhibit tongue retrusion while the appliance is worn in the mouth.

Lingual-Hypoglossal Reflex7
The lingual nerve is a branch of the third and largest division of the trigeminal nerve (V) with a mostly sensory function. Mechanical stimulation of the surface of the tongue by light probing or scraping can induce multiple reflexes involving such functions as opening the jaws, closure of the glottis, elevation of the palate and some degree of tongue retru- sion, but mostly tongue protrusion. The lingual-hypoglossal reflex, triggered by tongue stimulation, depends on the site of the sensory input. Stimulation of the medial branch of the hypoglossal nerve innervates intrinsic tongue muscles and brings about protrusion. The lingual-hypoglossal reflex can be facilitated by a prior conditioning reflex and thus trained by exercise. Stimulation of this reflex can also be incorporated into oral appliance design. 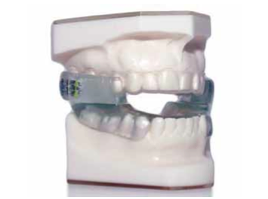 It would seem to be a reasonable assumption based on the Moses study and the cited studies on exercises that the operative mechanism by which airway dilation works in both cases is stimulation of hypoglossal reflexes. Reflex training during the day by exercises has a carryover effect during sleep. The reflex effect of oral appliances works as long as the appliance remains in the mouth. Hypoglossal reflexes operate at a site apart from the origin of the stimulus.

The effectiveness of oral appliances at treating OSA is well documented in the scientific literature.19,20,21,22,23 The effectiveness of exercise training is well demonstrated in the two articles cited.1,2 Neither methodology alone appears to be better than CPAP when using PSG measures; however, in a recent paper, Chan & Cistulli24 presented data that patient compliance, acceptance and comfort is better with oral appliances than CPAP . 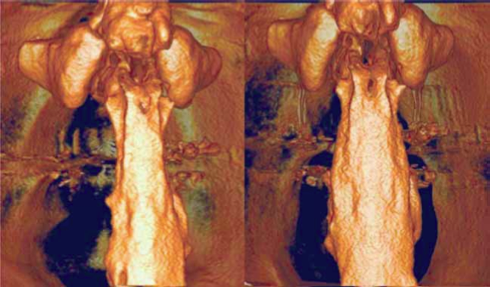 Evolution
The old idea that oral appliances are merely mandibular advancement devices, moving the tongue forward to pre- vent its collapse on the airway is an oversimplification. It does not account for the dilation of the sides and back of the pharynx visible on the 3-D computerized cone beam image with The MosesTM in place. The multidimensional airway dilation cannot be accounted for solely by active anterior movement of the mandible and the attendant passive pull- forward of the tongue base. Consideration and testing of oral appliance therapy in terms of their effect on airway dilation by reflex stimulation is warranted. It would seem that there is no downside or risk to a clinical strategy of a treatment protocol combining the two methodologies of oropharyngeal exercises and oral appliance therapy. It would also seem that future controlled trials to objectively evaluate the combined effects of oral appliances and exercises is warranted.