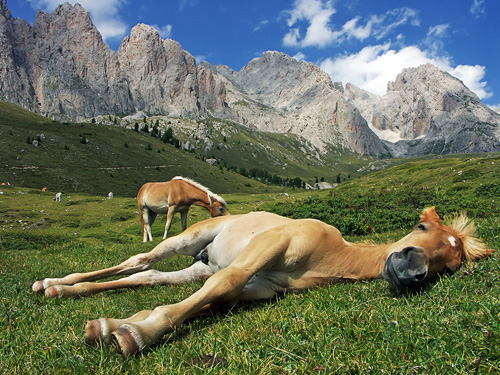 Consider that humans are the apex predators of planet earth. Even with that exalted status, it’s plenty difficult for humans to get some sleep. Now consider how difficult it must be for a 1,000-pound prey animal who lives outside to get some sleep. Such is the situation for horses, and countless years of evolution contribute to the need for guarded equine sleep. That is, at least one horse is usually on lookout while another lies down.

Writer Christa Leste-Lassere, MA tackles the issue of equine slumber in a recent posting on thehorse.com. “Horses don’t sleep much, but that doesn’t mean they don’t need it,” she writes. “Horses that don’t get enough deep sleep—the kind that requires lying down with the whole body or at least the head against the ground—can collapse from fatigue, according to an equine veterinary behaviorist.”

“The most important thing is that when horses are in that kind of sleep, either lying on their sides or resting their head, they can go into dream sleep, and all their muscles relax—which means that if they are not lying down, they fall down,” said Katherine Houpt, VMD, PhD, Dipl. ACVB, professor emeritus at Cornell University’s College of Veterinary Medicine, in Ithaca, New York in the article. Houpt spoke about equine sleep deprivation at the 2nd Conference of the Avenches National Equestrian Institute (IENA), held Sept. 11, 2021, in Switzerland.

Pastured horses, Houpt added, might spend more time lying down than stalled horses do. In her observations, horses with little bedding in their stalls would lie down regularly to rest and sleep in pasture. “I think it depends on if there’s just dirt—and the horse won’t sleep—or nice, soft grass,” she said.