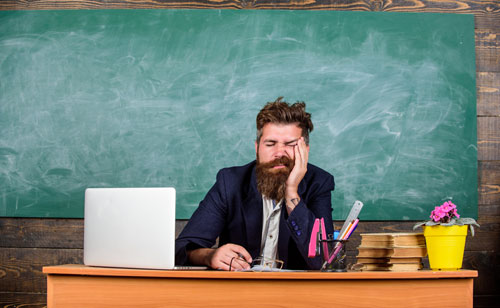 It’s feels like the same discussion we have every year about daylight saving time and similarly are our students school start time too early in the morning for normal cognitive functioning  Sleep deprivation in high school students has reached such a high level that students themselves are researching and writing about it. In a recent school newspaper feature, a sophomore took an in-depth look at the phenomenon.

Through interviews with her peers and a teacher, the student writer presented a stark picture of what it’s like to struggle through a day in school without adequate sleep. Daytime sleepiness, inability to concentrate, anxiety, and irritability all affect her classmates.

According to the CDC, teenagers should be sleeping 8-10 out of every 24 hours. One of Parisi’s classmates reported getting as few as four hours per night on a regular basis. This same student sometimes only manages a single hour of shut-eye. She noted:

According to The American Academy of Sleep Medicine, teenagers need eight to ten hours of sleep per night. Unfortunately, 72.7 percent do not get close to this amount.”

Why Do Teenagers Need So Much Sleep?

We don’t often question young children’s need for plenty of sleep. They’re tired by early evening and ready to go to bed. Their bodies and minds are growing and need the restorative power of 10 or more hours of sleep.

Teenagers’ bodies and brains are still going through enormous growth and changes, but some of those changes lead us to assume they need less sleep. Their circadian rhythm tends to shift as children age.

That shift makes teenagers less sleepy in the early evening, making it hard for some of them to fall asleep before midnight. The chemical changes occurring in teens leave them craving a sleep schedule of midnight to mid-morning.

What Interferes with Teen Sleep?

In addition to the biological changes of adolescence, teenagers face a host of pressures that keep them from getting enough sleep.

School schedules rarely recognize teenagers’ changing sleep needs. Early school start times pull students out of beds before their bodies are ready. Add the pressure of extracurricular activities that take place before school begins and many teens are up at the crack of dawn.

The American Academy of Pediatrics recommends that school for teenagers start no earlier than 8:30 a.m., but that is not the reality for most students. The average school start time is a little before 8 a.m., and some schools start well before 7:30.

High school students may arrive home after a full day of school with several hours of homework. Extracurricular activities, seen as essential for college applications, are not really optional anymore.

The pressure to maintain good grades while pursuing time-consuming outside activities reduces the available hours for sleep.

Many teenagers also want or need to get part-time jobs. They also face pressure from their peers to be socially active.

Teenagers benefit from both jobs and social activities. They are important parts of exploring their worlds and becoming responsible adults. But when they come at the expense of adequate rest, something eventually has to give.

Teenagers, understandably, want to relax at the end of a busy day. Today that means getting on Twitter or TikTok or texting with friends. While smartphones are convenient, they are poor sleep aids.

The constant stimulation of electronic devices makes it harder for teenagers to relax.

Teenagers can suffer from sleep apnea which leaves them fatigued no matter how many hours they sleep. Restless leg syndrome and narcolepsy aren’t common, but they can also affect teenagers. Both will cut into those precious sleep hours.

Insomnia is also a sleep disorder and can plague teens as well as adults. It may be caused by or result in symptoms of anxiety, depression, or both.

A sleep physician can help teenagers figure out if a sleep disorder is contributing to their fatigue.

Not getting enough sleep had serious consequences. Fatigue caused students and teachers to become attention-deficient, low in energy, and increasingly stressed.

Students who aren’t getting enough sleep often succumb to afternoon napping, further disrupting their body clocks. Their grades suffer as they struggle to stay awake at school. They can be irritable, forgetful, and distracted.

The physical health of sleep-deprived students also suffers. They have a greater risk of being obese, decreased athletic performance, and increased car accidents. They may be more prone to skin problems and acne, as well as at higher risk for diabetes and heart disease later in life.

Teens that are sleep deprived are also more likely to engage in risky behavior, everything from drugs and alcohol to carrying a weapon. It is believed that insufficient sleep negatively affects impulse control.

The result can be seen in behavior problems in the classroom. It can also be seen in seemingly unrelated activities like riding a bike without a helmet, not wearing seatbelts, or texting while driving.

Behavioral problems that result from sleep deprivation can have far-reaching consequences. They can also easily be overlooked as elements of the overall negative result of lack of sleep.

The general worldview that teenagers are morose and moody could be drastically changed if our teenagers got a sufficient amount of sleep.

How Can Teenagers Get More Sleep?

Reading everything above may make you think that teenagers can’t possibly get the 8-10 hours of sleep they need each night. But there are ways to help.

The first step is to encourage teenagers to practice good sleep hygiene. Sleep hygiene is an important part of everyone’s sleep health. Here are some basic sleep hygiene steps for teenagers.

Setting up a bedtime routine gives a teenagers’ mind and body time to relax before trying to go to sleep. Certainly, some teens fall asleep as soon as their heads hit the pillow, but for others, sleep can be elusive.

Having a calming ritual helps soothe nerves rattled from the pressures of school and other activities. Choosing comfortable pajamas, listening to music, reading, having a warm drink, doing some stretches, or meditation could be part of a bedtime routine.

On a more general level, later school start times would be a major relief for many tired teens. Advocate for school to start at 8:30 or later to give teenagers the extra sleep time their bodies need in the morning.

They also have fewer car accidents and indulge in fewer risky behaviors. And if that weren’t enough, students who get extra time to sleep in the morning get better grades.

Another significant result of starting school later was improved mood. Students feel more rested, feel less depressed and fatigued, and have improved attendance. They were also more motivated during class.

Shifting to later school start times is not without controversy. It can disrupt the timing of extracurricular activities, affect the schedules of younger students, and cause upheavals in bus schedules.

This seems a small price to pay for teenage students who are well-rested, more attentive, more focused, and have fewer behavioral problems. Helping students be physically and mentally healthy is worth some inconveniences.

It isn’t surprising that the pressure placed on students also affects the sleep health of staff.

Helping exhausted students struggle through their day takes a toll on teachers. They are also often in charge of the extracurricular activities students attend, extending their day. Add in after-hours work and you have a recipe for sleep-deprived staff. We need to stop expecting teenagers, who are still rapidly growing and changing, to handle schedules that are too much for adults.

Parents, schools, and students need to take a hard look at sleep health. Parents and schools can help reduce external pressures and shift schedules. Students can adopt better sleep hygiene. California Bill 328 is a massive step in the right direction and many States will be looking to California to see how the new legislative plays out.

Everyone needs to recognize the unfortunate combination of biology and society that’s leaving teenagers desperate for some shut-eye. We may find that our teens are not sullen and moody, they’re just tired. Making an effort to allow them adequate sleep is an important step in preparing them to be positive, capable adults.

Adults and teens need to work together to find solutions to the epidemic of sleep deprivation in students. Actually let’s scratch that line, teens have absolutely no say in all of this, so it’s down to the adults especially parents to work on better results that will benefit everyone.