Could a Different Tube Actually Make the Difference in the Battle for Compliance?

For example, what if the “best” mask is still too uncomfortable? Johan Verbraecken, MD, a pulmonologist and medical coordinator at the Belgium-based Sleep Disorders Centre, has seen this scenario on many occasions. One recent patient wanted to stop CPAP treatment after many failed attempts. “I asked him to try one more thing before he stopped,” says Verbraecken. “The only thing we changed was adding a heated tube. The patient was comfortable and happy with this intervention. We focus so much on changing masks, but tubes are often overlooked.”

Using the heated tube from the beginning, along with the heated humidifier, can also benefit sleep labs economically since fewer patients are likely to stop due to condensation. “Patients get moisture on their face at night, and it is not comfortable,” says Verbraecken. “The condensation can also make noise in the tube, similar to the sound of boiling water. This noise can often lead to stopping CPAP use, but the right tube can completely prevent it.”

A few companies have been paying close attention to tubes, and clinicians are now looking to the technology in an effort to find any edge in the race to boost compliance. The transfer of air from machine to patient is no longer overlooked. In fact, the field is literally getting hotter with heated tubes reducing the pesky problem of condensation.

A company called Plastiflex Healthcare, a division of Plastiflex Group NV, decided to use its considerable experience manufacturing industrial flexible hoses and apply it to CPAP. Plastiflex contacted Verbraecken’s Centre about 2 years ago as it reached out to the European market.

The wires generate heat that maintains air temperature inside the tube, ultimately warding off problematic condensation. Verbraecken notes that the wires are positioned for uniform heating along the tube’s entire length, a system that avoids water droplets on the wall of the tube—and the resulting accumulation of moisture. The combination of the heated tube and the humidifier works to control condensation.

Ludo van der Poel, area manager at Netherlands-based Vivisol, a home care company that supplies Hybernite systems to patients, agrees that the seemingly minor detail of the tube can make a major difference. “The old saying about the weakest link in the chain also applies here,” says van der Poel. “If you have a superior mask and a superior CPAP device, but a bad tube, you will not get the best results.”

Richard Webb, RRT, considers Hybernite a crucial add-on accessory, since it is not included with PAP devices. “The Hybernite is very beneficial for standardizing the humidification,” say Webb, CEO of Monitor Medical, a DME company with multiple locations throughout the United States. “We recommend it for most patients.”

Occasionally someone with severe allergies will request dry or cold air, but elevated humidity through increased temperature is usually the best remedy. Often the key is to mimic moisture conditions of the patient’s home state. “In a high humidity region, you get acclimated to 80% humidity, but if you are in a place like Colorado it is a lot dryer,” explains Webb. “The air you breathe with these PAP devices must be comfortable and not cause your tissues to swell. With swelling comes more resistance, and more resistance can lead to less effective pressure therapy. The humidity is not just for comfort. It is therapeutic.”

With critical CE approval in hand, Verbraecken says the Hybernite’s appeal stems from its ability to be used with each kind of humidifier. Other heated tubes on the market can only be used on one machine. “This tube is universal,” says Verbraecken. “That is a major advantage.”

Some manufacturers choose to make tubes that are only compatible with their own machines—a mistake in Verbraecken’s eyes. “I think it’s the wrong decision,” he says. “You are obliged to use their machine, and it’s protection for them. The market is so huge that it does not make sense anymore.”

At the moment, titration with humidification and heated tubing is not common. However, in cases involving chronic sinusitis and nasal obstruction, Verbraecken contends that the Hybernite could be an advantage. “You could eliminate specific side effects that could be disturbing and that could make a difference,” he says. “For many people, condensation feels as if the water is running from their nose and on to their face. It is like being in a swimming pool, and for many it is unacceptable.”

Better tubes have the potential to enhance CPAP and ultimately improve patient care, although studies must be done to back up this notion. “There is room to use these tubes in a routine setting and not just as an escape tool,” says Verbraecken. “We need large trials to look at the effects of routine application, which has the potential to enhance the objective of compliance.”

Close proximity to Plastiflex’s European headquarters fostered a relationship with officials at Vivisol who were able to give advice during Hybernite’s development. “We discovered this product before it was launched,” reveals van der Poel. “We were involved in the early stages, giving input from the field to the developers at Plastiflex to further refine the product prior to its launch.”

Years prior to contacting Verbraecken, Plastiflex officials also underwent an exhaustive fact-finding period that took them to numerous trade shows and visits with industry professionals. Designers narrowed down CPAP tubing complaints to condensation and comfort, and refining technology to deal with these two problems has remained the top priority.

After taking into account all this information, engineers developed a Hybernite® ROC that essentially consists of two main parts; one is a heated breathing tube and the other is a power supply. With standard conical connectors, company engineers claim that the Hybernite® ROC can fit the role of a universal solution that can be fully integrated into any humidifier—including all types of masks that use standard tubes. “We like the flexibility of the tubing and the high quality plastic,” adds van der Poel. “A tube that is not flexible or long enough could prevent patients from moving in an easy way. Poor quality can also lead to breakage.”

The system itself does not take power or require power to be taken from the humidifier. It takes the energy straight out of the socket in the wall via the Power Supply Unit (PSU). The system works with all humidifiers that currently use standard tubing—which is 99% of the market.

Johan Verbraecken, MD, is a pulmonologist and medical coordinator at the Multidisciplinary Sleep Disorders Centre, Antwerp University Hospital and University of Antwerp. He also serves as vice president of the Belgian Association for Sleep Research and Sleep Medicine.

Richard Webb is CEO of Monitor Medical, a DME company with locations throughout the United States. 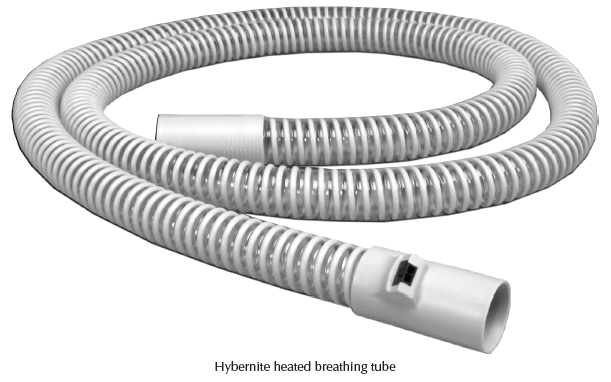