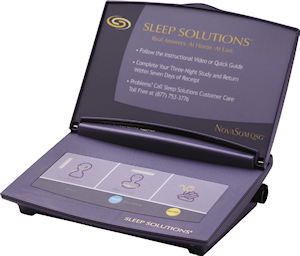 Sleep Solutions may have changed its name to NovaSom and moved the company from California to Delaware, but the company’s intense focus remains the same.

More than a year after taking the reins at the largest national service provider of home sleep tests, Richard Hassett, MD, believes the time is ripe for a change. Specifically, the CEO of Sleep Solutions has decided to switch the company’s name to NovaSom®, a move designed to build on the familiar home sleep testing brand.

Changing a well-known moniker is no small decision, but Hassett believes the new name better reflects the company’s commitment to providing accurate and cost effective home tests. Factoring in some annoying name similarities to competitors and the change became a no-brainer. “Other entities had the name ‘Sleep Solutions’ as some part of their name, and that could potentially be confusing,” says Hassett. “If we were ever going to make a change, now was the time. At the same time, we reincorporated the company from California to Delaware.”

Recent years have seen a steady climb for the NovaSom® brand in its role as a full-service model for home sleep testing. The actual unit is a small device used in the home and typically shipped to patients via overnight carrier. After that, it is returned to the company when the patient completes testing, ideally for three nights. Upon return of the device the data are downloaded and the results are interpreted by a qualified or board-certified sleep physician. Results are provided to the prescribing physician within 48 hours.

The NovaSom Home Sleep Test is a Type III portable cardio-respiratory monitor with FDA clearance for diagnostic evaluation of adults with possible sleep apnea. Predictive accuracy of the test, night for night, has been established in two peer-reviewed publications comparing the device to PSG.¹,²

Three sensors record the same five physiological parameters that sleep labs use to diagnose OSA: respiratory effort, oxygen saturation, heart rate, airflow (oral & nasal), and snoring. The first sensor is a belt that goes around the chest to determine respiratory excursions. The second is an oxygen sensor on the finger, and finally a sensor beneath the nose detects the snoring sound and air flow. This acoustic airflow sensor is a patented device utilizing noise cancellation technology, which has demonstrated a highly linear relationship to the Hans Rudolph pneumotachograph – a standard of airflow measurement used by pulmonologists.

Clinicians appreciate the unit’s capacity to store data for three nights, and users benefit from the device’s ability to literally speak via mechanical voice. “Similarly to a GPS, the NovaSom device talks patients through the procedure,” explains Hassett. “Even if patients have not had access to the Web site or seen the instruction materials that come with the test, the device will actually talk them through the set up and operation.” The company also provides technical and clinical services 24⁄7 by credentialed sleep technologist.

The consumer friendly nature of the test can mean the difference between diagnosis and failure. After all, says Hassett, potential patients often shy away from sleep labs, preferring the comfort and privacy of their own home. Factor in NovaSom’s lower price and it all points to more patients with proper diagnoses.

“Clinicians are starting to realize that we have a massive public health epidemic on our hands with OSA, and the sleep lab community can’t handle all the patients,” says Hassett. “The fact that the device has the capacity for three nights of data eliminates the high false negative rate which is a problem with any one-night test, whether it is home or lab based. This turns out to be an advantage for providers and patients.”

Hassett and NovaSom’s customers believe the secret lies in the product’s ability to overcome the inevitable night-to-night variability that can hamper sleep testing results. “It’s been known for a long time that there was a burden of false negatives with one-night tests, perhaps even more so with labs than at home because of how daunting, unfamiliar, and uncomfortable it is to achieve natural sleep in the lab environment,” says Hassett. “With the 3-night test, we pick up a significant number of patients after the first night that would have been missed. With the high false negatives after one night tests, it just makes more sense.”

Provider education teams from NovaSom are dedicating time and energy to increasing awareness among primary care physicians (PCPs), ENTs, and pulmonologists. Since there are so many more PCPs out there, they have so far naturally benefitted a bit more from these educational efforts.

Particularly for uncomplicated patients at the primary level, PCPs are the main portal for a variety of patients with many different apnea severities. “We read statistics that say 7 out of 8 people with OSA are undiagnosed and unaware,” says Hassett. “Most providers in America do not have the level of vigilance for this condition that its public health implications would warrant.”

By now the statistics are familiar, but no less staggering. The costs and co-morbidities seem to multiply every year, and Hassett believes medical research will continue to confirm these findings. “We provide the resources that primary care physicians need to identify people at risk for OSA and determine appropriate candidates for both in-home and laboratory tests,” says Hassett. “We have a field-based medical education force and have made significant investments in CME and non-CME educational programs, aimed at primary care.”

The NovaSom home sleep test is offered as a turnkey service. There is no capital investment required of physicians. NovaSom provides rigorous infection controls, biomedical inspection, testing and calibration for each device in between patient uses, ensuring that every test sent to a patient will function accurately. Physicians view detailed study results through the online MediTrack® system.

“NovaSom has a large client care team and offers live clinical/technical support, 24 hours a day, 7 days a week, to patients undergoing the home sleep test,” adds Roger Richardson, vice president, Operations, for NovaSom. “We try to make testing as easy as possible, and are committed to raising consumer awareness of OSA through http://www.apnea.com.”

NovaSom, Inc. is fully accredited by The Joint Commission‘s Ambulatory Care Program, is a Medicare-approved Independent Diagnostic Testing Facility (IDTF), and is registered with the Food and Drug Administration.