Developing the leading consumer brand in the realm of snoring cessation is no small achievement.
For Daniel A. Webster, co-founder of Sleeping Well LLC, the process started modestly enough.

Long before creating the company’s signature ZQuiet oral appliance, Webster snored incessantly. And not surprisingly, it drove his wife crazy, particularly after the couple had their first child and sleep became a highly valued commodity.

Like so many snoring sufferers, Webster did not think to go to his dentist, but instead ventured to his primary care physician. The PCP sent him to a specialist who ruled out sleep apnea and recommended elective surgery.

After surgery, Webster laments that he had “big medical bills that were not covered by insurance, a long painful recovery, and after a few weeks of recovery, I continued to have a snoring problem. At that point, my wife and I were clearly devastated.”

After much pain and expense, and still no remedy, Webster fi nally discovered oral appliance therapy—thanks to his local dentist. “It worked the very fi rst night, and it literally changed our lives,” he says. “It was a surprise that there was a solution out there that not many people knew about. And that thought just kept nagging at us.”

With snoring vanquished in the family’s Vermont-based home, the epiphany simmered for a few years until Webster decided he could help the masses who were in his same situation. Sleep Diagnosis & Therapy sat down with Webster during 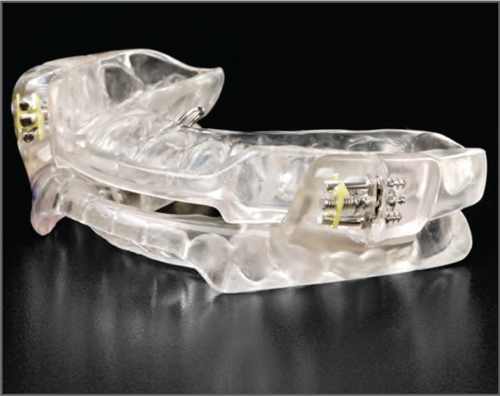 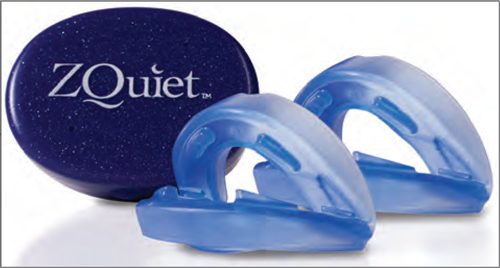 the second quarter of 2014 to get the backstory on ZQuiet’s remarkable success story.

There were Oral Appliances already on the Market when you Started the Sleeping Well company. What did you think you could do better than other Products already out there?

Daniel A. Webster, co-founder of Sleeping Well LLC, Shelburne, Vt: We wanted to create a solution that was both easy to use and affordable. We did a lot of research and ended up working with a California dentist who was experienced in dental sleep medicine. We also hired an engineer, and we developed ZQuiet.

When did you begin Marketing the ZQuiet?

We began marketing the device in 2009. We got FDA clearance and we got some investment money. We also got a patent for it.

What was your main Marketing Avenue?

We started marketing our ZQuiet mouth piece on national television.

What has been the Response?

Over the last 5 years, we’ve developed what has become the leading consumer brand in snoring, and have introduced the concept of oral appliance therapy to millions of Americans.

Why has your Marketing Message Resonated so Widely?

The business, and its marketing, is really geared toward saving relationships and marriages, and helping couples like ourselves.

When did you start to Focus on the Sleep Apnea side of the Equation?

Over time, we began to understand the correlation between snoring and obstructive sleep apnea. Many snorers did not have apnea, but some of them did, and we realized that ZQuiet could be a first step to reach this audience and educate them. About 85% of the apneic population remains undiagnosed.

How did you Begin to Focus on Apnea Sufferers?

We learned more about dental sleep medicine, and we met a dentist from Cleveland, Ohio, who really recognized the benefi ts of our non-custom ZQuiet mouthpiece, and how it could be used as a temporary device– while a custom appliance would be made.

What do you mean by a Temporary Device?

The ZQuiet can serve as a great introductory mouthpiece to help patients understand the benefits of oral appliance therapy, while allowing them to try the therapy at a very low cost before committing to a more expensive custom oral appliance.

How did you Eventually get into the Custom Oral Appliance Business?

We met a dentist named John T. Herald, DDS, and Dr. Herald knew our reach in the market place. He introduced us to a custom appliance that he had designed. At that point, we formed a great partnership, bringing together our
marketing resources with his expertise as a sleep dentist and designer of a great custom oral appliance.

Have you Received FDA Approval for the Device?

It is a mandibular advancement device and we call it the ZQuiet Pro–Plus.

What has been the Reaction Among Dentists?

Initially, when we came into the market, many professional dentists who were practicing sleep medicine were upset by ZQuiet, or were not happy to see the product advertised on T.V. and offered at a low cost.

Why were they were Initially Upset?

They thought that maybe it would reduce the number of patients who would come to them to be treated.

And has that Come to Pass?

Since we’ve introduced the concept of oral appliance therapy on national TV, we hear from dentists all the time that we have actually increased their patient flow, because people have said, “Oh, I saw that ZQuiet on T.V, can you make me one of those? I didn’t know that I could treat snoring with a dental device.” Initially, we were perceived as a threat, but we have actually benefited the industry by creating that consumer awareness.

Why is Sleep Medicine Growing, and how will you Address the Increased Demand?

We want to build on what we have accomplished and provide education, because there are a lot of medical risks associated with snoring and sleep apnea.

Why go Directly to Consumers via Television, Instead of more Aggressive Marketing to Referring Physicians?

Medicine is moving toward a consumer-directed initiative, and consumers are taking health care decisions into their own hands. There are an estimated 70 million people who suffer from snoring, and that’s not just one person, it’s two people because there is a partner involved. We’re trying to help consumers become more educated about snoring and sleep apnea. Ultimately, it helps create a connection to a network of dentists who are practicing sleep medicine, so that patients can be screened and treated.

Why do you think you weren’t Guided Toward Oral Appliances Sooner in the Case of your own Snoring Problem?

I should say first that I don’t have a medical background. I don’t have a degree in dentistry. I’m really an entrepreneur who had a snoring problem and figured out a way to help a lot of other people in the same situation.

What I’ve come to learn is that students going through medical school maybe get one to two hours of training on sleep and sleep disorders. More recently, maybe it’s increased to three or four hours, but given the number of hours that are involved in medical school, it’s a fraction of a percent. Most physicians really don’t know a lot about sleep. The ones that are more specialized in sleep disorders— ear nose and throat—are doing the procedures.

What is your Opinion of CPAP?

If you snore and have sleep apnea, the specialists are taught that CPAP is the gold standard. You hear that all the time. And CPAP is indeed very effective, but typically it’s less than 50% compliance rate for CPAP.

What is the Level of Acceptance these days for Oral Appliances?

Oral appliances have been around for decades, but there is a disconnect between medical professionals and dental professionals. Until recently, physicians didn’t think to refer patients to dentists. There are about 3,000 members in the American Academy of Dental Sleep Medicine. It’s a relatively small population, and people don’t think of sleep or breathing disorders as something you would speak to dentists about. That is changing, but 10 years ago when I was going through this, there were very few relationships between physicians and dentists, and very little public awareness about oral appliances.

There’s a lot of Competition out there, how are you able to Continue to do so well?

American consumers are looking for low cost, easy solutions, and I think that ZQuiet is able to provide that. It’s really our value proposition. It is a simple solution to a very common problem, which is snoring. Now, if you have sleep apnea, then you do need to work with trained dental or medical professionals. We are opening the door and helping people to take a first step.