“Despite treatment for these individuals, they have persistent sleepiness or sleepiness as a part of the abnormality,” says Bogan, chairman and chief medical officer of SleepMed Inc, Columbia, South Carolina. “We not only need to reduce morbidity and mortality but to approach these individuals from a symptomatic perspective, because they deserve to be treated.” 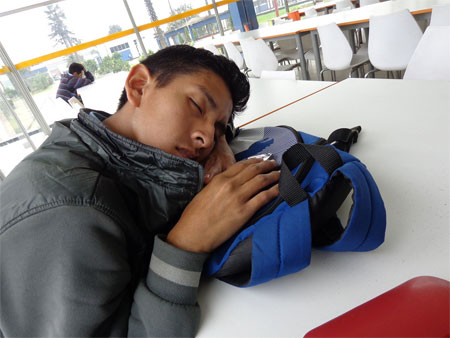 Too many clinicians declare sleep disordered breathing to be “solved” if sufficient treatment measures are put in place. What if excessive daytime sleepiness (EDS) persists? As a pulmonologist who also serves as a clinical professor at the University of South Carolina School of Medicine, Bogan believes that OSA has significant medical complications, particularly when it is moderate to severe. Furthermore, people with OSA may experience EDS.

The American Sleep and Breathing Academy (ASBA) sat down with Bogan to get his perspective on the evolving understanding of sleep apnea and persistent EDS.

ASBA: What is excessive daytime sleepiness?
Bogan: Excessive daytime sleepiness (EDS) is what we consider a chronic medical condition associated with obstructive sleep apnea (OSA). More than 22 million adults have sleep disordered breathing and OSA is the most common, and the most common symptom is EDS. The evolving science is telling us that there is evidence of brain abnormality and brain dysfunction in individuals with EDS associated with OSA. This is a chronic medical condition.

ASBA: We understand that there was an EDS-related Harris poll recently conducted. What was the main reason for conducting the poll?
Bogan: The Harris poll was a way of asking individuals who have OSA and persistent EDS how they feel. How does it affect quality of life? We know that individuals with EDS have problems with brain function. They not only are sleepy, they are tired—a different kind of tired. They also have problems with memory and focus, and various tasks as well as mood and motivation and all of those affect quality of life. The Harris poll gave us some insight into how this affects quality of life in these individuals.

ASBA: Who participated in the poll?
Bogan: Patients with persistent EDS with sleep apnea were interviewed—over 300 people and their partners as well—to get an idea of the impact on quality of life.

The take home message is that the impact on quality of life is significant when it comes to workplace performance, interpersonal relationships, and social interaction—not to mention drowsy driving and the risk of fatigue-related accidents. This is a real medical condition. We are trying to raise the awareness that it needs to be addressed.

ASBA: What surprised you?
Bogan: One of the things that surprised me was the number of individuals who have persistent EDS and they don’t talk to their doctor about it.

ASBA: Why would they not talk about it?
Bogan: They think it’s their fault, or they have sleep apnea and they are treating it, and just think this is the way life is. And the physician on follow-up did not always ask about how sleepy they were. They were more interested in the medical risk of sleep apnea, not the brain function problems that these individuals were having as a result of the persistent EDS. Most of the time in this poll, the patients did not bring up that they still had symptoms. If you look at the data from the poll, they don’t bring it up and the docs don’t. Of the 74% of patients who had discussed EDS with their doctor, about 64% say they are the ones who initiated the conversation.

Again, this is not a criticism of the doc, but as physicians we say, ‘You have this abnormality and I am treating it, so I’m doing everything I can,’ but now we have pretty clear objective evidence that this is a real medical condition with persistent EDS, and I think more and more physicians are beginning to recognize that, and that’s the value of the poll. It’s helping us understand that these individuals are frustrated with significant quality of life issues.

ASBA: Why would EDS persist in the presence of accepted treatment?
Bogan: Now we know that there is evidence and evolving science that says that there may be some brain abnormalities. Is that the total explanation? Maybe not. The point is that there is objective and subjective info now that these individuals are impaired, and we do have treatments available and we should treat them. If we can improve their quality of life, we should do it.

ASBA: What should be our mindset when thinking about the future?
Bogan: In thinking about this, the important message is for us to recognize that these individuals have some sort of impairment beyond the medical risk. There are FDA approved drugs, and there are drugs approved to treat persistent EDS in patients with OSA, and there are some drugs that have been recently studied that are pending. We must have our eyes wide open for drugs now and in the future that can address this issue of persistent EDS in patients with OSA.

We see patients who still have residual and persistent symptoms of EDS, but now the science is evolving and showing us that this is very real. You’re not the only one who is seeing this. It’s a very real clinical and medical situation that needs to be addressed. It has kind of validated what we’ve been doing.

The take home message is that OSA has significant medical complications, particularly when it’s moderate to severe. These individuals need to be treated properly, whether it’s CPAP, an oral appliance, weight loss or whatever the treatment. The other important message is that despite treatment for these individuals, they have persistent EDS or sleepiness as a part of the abnormality. We not only need to reduce morbidity and mortality but to approach these individuals from a symptomatic perspective, because it does not feel good and they deserve to be treated.

Dr. Bogan received his bachelor’s degree in chemistry from Wofford College and his MD degree from the Medical University of South Carolina in Charleston. He served his internship and residency as well as was Chief Medical Resident at the University of Alabama Hospital and Clinics in Birmingham. Thereafter, he completed a fellowship and assistant professorship in the Pulmonary Division of the Department of Medicine at the University of Alabama School of Medicine. He has been certified by the American boards of Sleep Medicine, Internal Medicine, and Pulmonary Diseases.

Dr. Bogan has served as principal investigator on numerous clinical trials in the past and continues to do so now. He has a variety of publications and research interests that focus on topics such as narcolepsy, insomnia, sleep apnea, shift work sleep disorder, restless legs syndrome/periodic limb movement disorder, chronic fatigue/fibromyalgia and circadian rhythm abnormality.